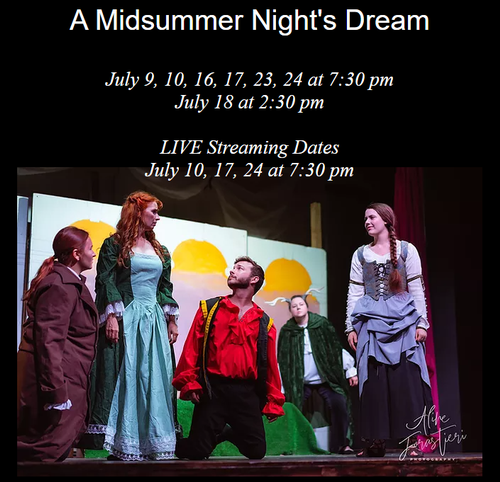 Event Description:
Athens prepares for the wedding of Duke Theseus to Hippolyta, Queen of the Amazons. Egeus, an elder of the court, wants his daughter, Hermia, to marry his friend, Demetrius, but she is in love with Lysander. The law gives fathers the right to arrange marriages. Theseus gives her three choices: obey her father, be executed or become a nun. Instead Lysander and Hermia decide to elope and flee the city at night. They tell their friend Helena, who loves Demetrius. Helena tells Demetrius of their plan and they follow the couple into the woods. Also in the woods, a group of local craftsmen rehearse a play they hope to perform for Theseus’ wedding. All the mortals are unaware that at night the woods are the domain of magical fairies, ruled by Oberon and his queen, Titania. However, the course of true love never did run smooth. Oberon and Titania are quarrelling. As the young Athenians chase through the woods, Oberon takes pity on Helena and orders his mischievous servant, Puck, to use magic to help her win Demetrius. Through a series of mistakes, the lovers change affections and quarrel. Puck also makes Bottom, one of the rehearsing craftsmen, appear with the head of an ass. Oberon uses magic so Titania becomes infatuated with Bottom. As the dawn comes, all is corrected. Demetrius loves Helena, Lysander loves Hermia, Titania loves Oberon, and Bottom is restored to his former self just in time to perform at the wedding of Theseus and Hippolyta. The lovers join the royal couple to watch Bottom and the craftsmen’s unique staging of their play. Afterwards the mortals retire to their bedchambers as Oberon, Titania, Puck and the fairies bless the palace.
Location:
Bastrop Opera House 711 Spring St. Bastrop, TX 78602
Date/Time Information:
Live Theatre Performance July 9, 10, 16, 17, 23, 24 at 7:30 pm July 18 at 2:30 pm Live Streaming Performance July 10, 17, 24 at 7:30 pm
Fees/Admission:
$15 Reserved Seating
Set a Reminder:
Business Directory News Releases Events Calendar Hot Deals Member To Member Deals Job Postings Contact Us Weather Join The Chamber
Go mobile with MyChamberApp!