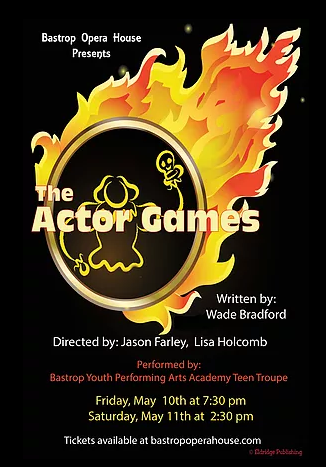 Event Description:
In this dystopian/Hunger Games parody everyone is starving...for attention! Society's obsession with all things drama has become so distracting, the Capitol has outlawed all auditions and has divided the population into ten districts: Greek Tragedy, Shakespeare Drama, Commedia Dell'Arte, and others. During the annual Actor Games, a tribute from each district competes to become a star. The losers must suffer the fate of the Fallback Wheel. This year, Meryl hopes to become the first ever winner from High School Drama. Unfortunately, the odds are never in her favor. The Actor Games is a fast-paced one-act play that provides lots of comedy opportunities for each cast member, as well as a humorous overview of modern and historic acting methods.
Location:
Bastrop Opera House 711 Spring St. Bastrop, TX 78602
Date/Time Information:
May 10 at 7:30 pm May 11 at 2:30 pm
Fees/Admission:
Adults $10 Seniors/Veterans/Active Military: $7 Children and Students: $5
Set a Reminder:
Business Directory News Releases Events Calendar Hot Deals Member To Member Deals Job Postings Contact Us Weather Join The Chamber
Go mobile with MyChamberApp!